The Northern Mariana Islands and Indonesia have been the centres of COVID-19 growth in the region, whilst Papua New Guinea has voted to extend lockdown measures despite domestic pressure. Meanwhile, New Zealand has faced calls to open up to Pacific tourism, Hugh McClure writes

Here is a snapshot of policy responses to COVID-19 in the Pacific region, correct as of 12pm AEST, 9 June 2020.

The Week in Review 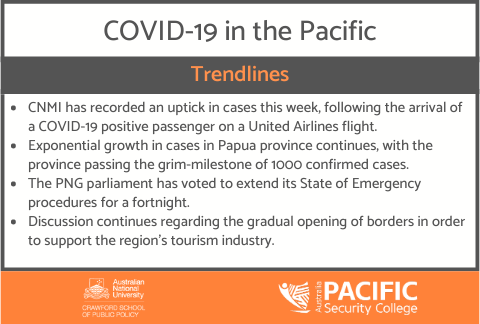 The Commonwealth of the Northern Mariana Islands (CNMI) and the Indonesian provinces of Papua and West Papua have led the Pacific region’s growth in COVID-19 cases this week. CNMI now reports 28 confirmed cases of COVID-19, up from 22 on 1 June. The increase in cases is the result of contact tracing, after a passenger from a May United Airlines flight from Guam was confirmed to have COVID-19. Mass-testing remains ongoing in CNMI with 7200 people having now been tested for COVID-19, including 10 per cent of the population of Saipan.

Papua province surpassed the grim-milestone of 1000 confirmed positive cases this week. Indonesian health authorities reported 1090 confirmed cases on 8 June, up from 725 cases a week ago. Meanwhile, the total number of cases has reached 179 in West Papua province.

The political response to the COVID-19 pandemic has been centre-stage in PNG this week. The Parliament voted 80 – 2 to extend the country’s State of Emergency procedures for a further fortnight from 2 June. This came despite the Governors of Madang, Eastern Highlands and East Sepik provinces going on the record to express that they did not support any extension to the State of Emergency.

Meanwhile, Governor Allan Bird has this week cautioned that the true level of COIVD-19 may be greater than what has been tested for, and confirmed, by national health authorities. Governor Bird has cited 1153 surveillance tests which were conducted by medical professionals in his province that returned 50 positive results for COVID-19 antibodies.

While national borders remain closed, 30 PNG citizens have been deported from Jayapura in West Papua back to PNG this week, and a repatriation flight for PNG citizens living in Fiji, Vanuatu and the Solomon Islands arrived on 5 June. Similarly, an outbound flight to Honiara returned three Solomon Islanders who had been stranded in PNG since borders closed.

The countdown is on to the resumption of travel and tourism in the Pacific region. With New Zealand officially COVID-19 free this week, some have called for NZ to prioritise a travel bubble with COVID-19-free areas of the Pacific, including Vanuatu and the Cook Islands, ahead of its travel bubble with Australia, in order to provide a boost for the region’s tourism industry.

French Polynesia is expected to be the first Pacific tourist destination to reopen its borders next month, with Air Tahiti Nui announcing it will offer promotional fares. It was announced this week that from mid-July, arrivals will not need to quarantine, needing only a certificate less than three days old to show that they have tested negative to COVID-19. In the Cook Islands, the Prime Minister announced this week that Cook Islanders and work permit holders will be allowed to enter the country from 30 June.

Elsewhere, CNMI has forecast that it aims to reopen its borders in July. However, a recent US suspension on incoming flights from Chinese airlines has dealt a blow to the Commonwealth’s tourism industry which is heavily reliant on the Chinese tourism market. New Caledonia is proposing to open borders on 31 July, while Vanuatu Tourism authorities are aiming for a 1 September reopening.