The Solomon Islands Government has been accused of mishandling its recent stimulus package, whilst the first group of Tongan seasonal workers since the start of COVID-19 has arrived in Australia, Hugh McClure writes.

599 cases of COVID-19 have now been confirmed in Papua New Guinea (PNG), with the Autonomous Region of Bougainville recording its second confirmed case of the virus this week. Elsewhere in the region, Solomon Islands has reported 13 cases of the virus. In the French Pacific, 9,995 cases have now been confirmed in French Polynesia with 39 deaths whilst one new case this week brought the total number of cases confirmed in New Caledonia to 29. In the northern Pacific, Guam has reached 5,233 cases and 90 deaths, while the Northern Mariana Islands has recorded its 100th case. 9,308 cases have been confirmed in Papua Province, and West Papua Province has recorded 4,509 cases.

Here is a snapshot of policy responses to COVID-19 in the Pacific region, correct as of 12pm AEST, 10 November 2020. 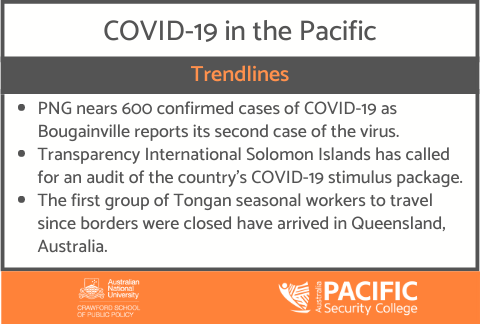 As the total number of COVID-19 cases in PNG notches closer to 600, the country’s National Pandemic Control centre has sent workers to the Hela province to support local officials after a positive case of the virus was detected. The detection of the virus reflects the continuing spread of COVID-19 in the country, with the Autonomous Region of Bougainville confirming its second case of the virus this week. The political storm around treatment research continued in Port Moresby this week. Prime Minister Marape has said that funding allocations from PNG’s government to support research into a potential COVID-19 treatment will not be a “giveaway”, and will be shared between government institutions and a new private company.

Transparency Solomon Islands is calling for an audit of the Solomon Island Government’s $39 million stimulus package. The organisation’s chief executive, Ruth Liloqula, has said that a leaked list of recipients indicates that many public servants and people without legitimate businesses or projects are among those receiving stimulus payments. Also making news in Solomon Islands this week, nurses have followed-through with industrial action, striking over the government’s failure to pay outstanding allowances.

The first group of Tongan seasonal workers to travel to Australia since the beginning of the COVID-19 pandemic has arrived in Queensland and will now enter a period of quarantine. The 151 Tongan workers follow on from 323 ni-Vanuatu workers currently employed in Australia’s Northern Territory.

Surangel Whipps Jr has been elected the next President of Palau, taking over from Tommy Remengesau Jr, whose term has expired. Whipps Jr has been a vocal supporter for broadening Palau’s economic base, noting concerns that the country’s reliance on tourism has been exposed during the COVID-19 pandemic. Meanwhile, Lemanu Peleti Mauga was successful in the American Samoa gubernatorial election last week, replacing Lolo Matalasi Moliga, whose term expired.

French Polynesian unionist Patrick Galenon has called for a lockdown in French Polynesia to stem the spread of COVID-19. His calls mirror action taken in France and come as strike action has been scheduled in schools over the lack of response from authorities to the pandemic. The French military is readying 10 intensive care units as well as additional staff for the Territory.

The United Nations Development Programme (UNDP) has recommended the introduction of a Temporary Basic Income (TBI), stating that such a measure would aid in slowing the surge of the virus in developing countries across the globe, including in the Pacific. UNDP Chief Economist has said that PNG, Vanuatu, Solomon Islands, Federated States of Micronesia (FSM), and Kiribati have each been surveyed and identified as countries that would benefit from a TBI. The UNDP has said that many employed in the informal sector simply have no choice but to work, and accordingly, contribute to the virus’ spread. Modelling says that in PNG, a TBI for six months during the pandemic would cost the government 0.4 per cent of GDP. Tuvalu is one of just two countries globally – the other being Namibia – to have already adopted the TBI proposal.

New Zealand officials look set to visit the Cook Islands in the coming week for talks about an upcoming travel and trading bubble. Meanwhile, Fiji’s Minister for the Economy, Aiyaz Sayed-Khaiyum, has again pushed for a travel bubble between his country Australia and New Zealand. Minister Sayed-Khaiyum has said that, since the virus is contained in Fiji, tourists should not have to quarantine on arrival to their home country.