A return to international tourism in the Pacific is looking less likely, whilst repatriation has continued to be a source of significant anxiety for those trying to contain the virus. Hugh McClure writes. 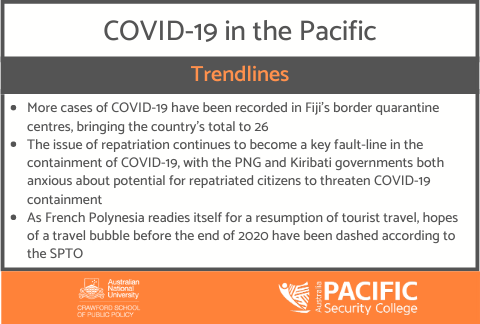 More cases of COVID-19 were recorded in the Pacific region this week. Fiji has recorded its 26th case of the virus, an increase of five from this time a week ago. All five new confirmed cases have been in border quarantine, thus posing little risk to Prime Minister Bainimarama’s much-trumpeted containment of the virus in Fiji.

Further north, the Commonwealth of the Northern Mariana Islands (CNMI) has recorded its 33rd case. There is concern as one person confirmed to have the virus briefly journeyed to the island of Tinian. Elsewhere, Guam has recorded its 312th positive case, while there are 2,365 confirmed cases in the Indonesian governed Papua Province and 286 cases in West Papua Province.

Repatriation is continuing to emerge as a potential fault-line in the region’s COVID-19 containment, with governments concerned about their ability to effectively quarantine and isolate returning citizens. In the lead-up to the repatriation of 100 PNG nationals from West Papua later this month, the Indonesian Ambassador to PNG has met with PNG’s Border Security Minister.

This comes as the number of confirmed COVID-19 cases in Indonesia has eclipsed 77,000 – with more than 2,000 of those cases in bordering Papua Province – as opposed to the 11 confirmed cases in PNG. Kiribati President Taneti Maamau has called for patience this week, announcing that repatriation of i-Kiribati will be on hold until the construction of quarantine and isolation facilities has concluded.

The French Polynesian government has launched an online registration system as preparations continue for international travel from Paris and Los Angeles later this month. The online registration system seeks to make travel into the territory safer, and easier to track, and will include the traveler’s itinerary and travel insurance details. Although arrivals must provide evidence of returning a negative COVID-19 test within 3 days of arrival, tourists will be given a kit to test themselves for COVID-19 upon arrival.

Elsewhere in the region, progress towards a return to tourism looks more negative. South Pacific Tourism Organisation (SPTO) CEO Chris Cocker has said that hopes of a travel bubble this year have been written-off. The Fijian government appears to have given up on hopes of a ‘Bula Bubble’, instead encouraging Fijians to travel domestically to keep the industry alive. In the CNMI, which is preparing to reopen borders to tourists this week, scheduled flights to Asia – the Commonwealth’s primary tourism source – are not expected until September.

Briefly, flaws in PNG’s economic stimulus have been reported this week. The Micro-Small Medium Enterprise Council has reported that K200 million in funding for Small and Medium Enterprises has not been received, despite being promised as part of the government’s COVID-19 economic stimulus package. Meanwhile, Prime Minister Marape has apologised to church-run health facilities that have been forced to close their doors recently due to a four-month delay in payments of salaries and operational funds from the government.

Elsewhere in the region, the Samoan government has announced that all residents surveyed for this year’s census will receive USD 18 as part of the second round of economic stimulus in the country. On the subject of government stimulus payments, in Niue, a country which has traditionally returned a balanced budget, the government has forecasted a substantial deficit as a result of the altered economic climate during the COVID-19 pandemic.