There are fears that rural Papua New Guinea may be underreporting COVID-19 cases, whilst the leaders of Micronesian states free of the virus are preparing to meet in person for the first time since the beginning of the pandemic, writes Hugh McClure.

It has been a week of grim COVID-19 case number milestones in the Pacific Island region. Papua New Guinea (PNG) has passed the 500 case mark, with 516 cases and six deaths now confirmed, while French Polynesia has surpassed 1,000 cases, recording 1,055 cases and its first two deaths. Guam’s total has reached 1,891, and two new cases have been recorded in the Northern Mariana Islands, bringing its total to 60. One case has been detected in border quarantine in Fiji, and the combined total for Indonesia’s Papua and West Papua provinces has reached 5,757 cases and 81 deaths.

Here is a snapshot of policy responses to COVID-19 in the Pacific region, correct as of 12pm AEST, 15 September 2020. 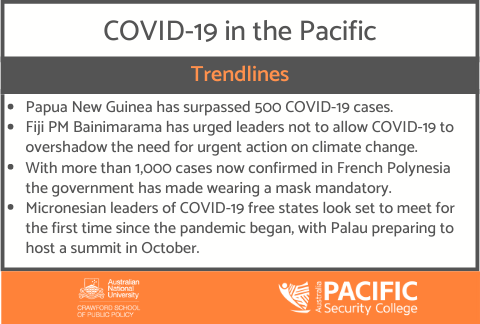 Of PNG’s more than 500 cases now confirmed, 300 were recorded in the National Capital District and 185 in Western Province. However, pandemic controller David Manning issued a warning that there may be underreporting in regional parts of the country due to limited testing. This comes as the Ok Tedi Mine, which has been the main source of cases in Western Province, returns to operations this week after a six-week shutdown.

Also in PNG this week, the country’s treasurer handed down a supplementary budget, and mid-year economic and fiscal report. The statement revealed an increase in expenditure, a shortfall in revenue, and an associated increase in the debt to GDP ratio from 40.3 per cent in 2020 to 55 per cent in 2021-2022.

Health Minister Wong addressed the delay of the country’s health plan, which was due to be handed down in July. The minister said that expertise shortfalls associated with the pandemic response have led to the delay.

Climate change has been in the spotlight this week with Fiji Prime Minister Frank Bainimarama saying that climate change still warrants urgent action, even amidst the COVID-19 pandemic. He told delegates of the Virtual Islands Summit that the pandemic has left island nations isolated. At the same summit, former Tuvalu Prime Minister Enele Sopoaga targeted a lack of action by the United States and Australia on climate change.

Despite authorities previously ruling out tightening restrictions, the wearing of masks has been made mandatory in French Polynesia. It is now compulsory to wear a mask in enclosed public spaces, on public transport, and for children aged over 11 years old. This comes at the same time as over 100 employees of Air Tahiti Nui accepted voluntary redundancy packages, as the airline grapples with reduced flights. 993 of French Polynesia’s 1,055 cases have been recorded in the second wave, which has coincided with the opening of borders to commercial tourism since July.

Six Solomon Islands students studying in the Philippines have returned positive COVID-19 tests. 385 Solomon Islanders are awaiting repatriation from the Philippines, with three repatriation flights scheduled to occur before the end of October. Meantime, the Solomon Islands government has assured residents of the Shortland Islands that food will be provided under the National Disaster Framework, following food shortage concerns due to the Bougainville border closure.

In Kiribati, the government has revealed its borders will remain closed for the rest of the year, with exemptions for repatriates. It announced that preparations are nearing completion for the country’s first repatriation flight, with a group of 20 i-Kiribati in the Marshall Islands set to be the first repatriates.

The leaders of Micronesian countries with no recorded COVID-19 cases are preparing to meet in person for the first time since the pandemic began. Palau’s President Remengesau confirmed that his country will host the leaders of Kiribati, Nauru, the Federated States of Micronesia, and the Marshall Islands in mid-October.

New analysis highlighted the severity of Guam’s second wave. 70 per cent of the country’s total recorded cases were diagnosed in August and September, with 10 per cent of tests conducted during this period returning a positive result. 249 cases have been associated with US military personnel.

Briefly, a family in the Cook Islands has entered into supervised quarantine after a member of the family had contact with a person repatriated from New Zealand, while shortages in the Northern Mariana Islands’ health system were revealed as the only hospital in the country was forced to run on back-up power for six hours after its electricity was cut over unpaid bills.