A COVID-19 second wave has rocked much of the Pacific, whilst Australia and Vanuatu have met to discuss economic partnerships, writes Hugh McClure. 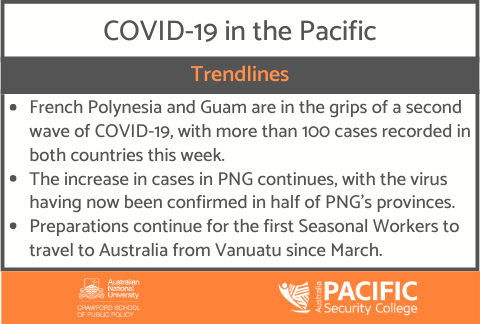 A brutal second wave of COVID-19 has most definitely arrived in large parts of the Pacific islands region this week. French Polynesia has recorded more than 100 cases of COVID-19 in the past week, bringing their total to 166 cases. Also experiencing a second wave, Guam has recorded 558 cases, up from 404 a week ago, with 201 cases currently active.

The rapid increase in cases in Papua New Guinea (PNG) has continued, with 333 cases now confirmed. Of concern, the virus has now been reported in half of PNG’s provinces. In neighbouring Papua province 3432 cases and 36 deaths have been confirmed, while 607 cases have been recorded in West Papua province. Elsewhere, one case has been identified in border quarantine in Fiji this week.

Finally, the Northern Mariana Islands has now recorded 53 cases, with the first case of community transmission since June 3 detected this week. French Polynesia has recorded significantly more cases in the past week than it did in its entire first wave from March to June. The cause of the second wave is believed to be a dinner party held at a restaurant in Papeete on 31 July, which has led to widespread community transmission.

51 of 72 members of a French Mobile Squad have returned positive tests for COVID-19 on their return to France, with those cases linked to the 31 July dinner party.

With the virus having now been confirmed on a number of islands including Huahine, Bora Bora and potentially the Marquesas, as well as Tahiti, there have been calls to reinstate mandatory quarantine for international arrivals to French Polynesia, a call which has been refused by the territory’s government as well as by the French High Commission.

PNG Prime Minister James Marape has said that his country must learn to live with the virus, as the number of cases continues to rise in his country. Although the 10pm-5am curfew remains in place, the lockdown period has now elapsed. As a result, schools have reopened and restrictions on inter-provincial travel have been lifted.

Alarmingly, a woman in Milne Bay province with no history of travel has been confirmed to have the virus, highlighting the extent of community transmission in the country. While the National Capital District still accounts for the majority of cases in the country, Western Province recorded the most new cases on Thursday, with contact tracing and testing ongoing with relation to the Ok Tedi mine site.

Also this week in PNG, the government-chartered two Air Niugini flights to repatriate 100 citizens from China and Malaysia. Meantime, Pandemic Controller David Manning has attempted to explain the arrival of 170 contract workers from China, saying that they are required for infrastructure projects and have complied with quarantine restrictions.

Meanwhile, in the aftermath of the first confirmed case in Bougainville, the State of Emergency (SOE) has been extended until 1 September, meaning that the Autonomous Region’s Presidential election will occur under SOE conditions. The Solomon Islands PM has urged for vigilance on the border between the Solomon Islands and Bougainville in response to the case.

Australia’s Minister for International Development and the Pacific has met with Vanuatu’s Minister for Finance and Economic Management this week to discuss economic partnerships between the two countries. This comes as the trial resumption of the seasonal worker program looms, with 170 ni-Vanuatu workers set to be temporarily employed on mango farms in Australia’s Northern Territory. Meanwhile in Vanuatu, the Livestock Department is planning to distribute one million chicks throughout the country to address protein shortages associated with COVID-19 and the aftermath of Tropical Cyclone Harold.

Samoa’s government is disputing claims made on social media this week that a man died as a result of COVID-19 in the country. The man, who died on 15 August, had completed a 14-day mandatory quarantine on 31 July and had tested negative after being repatriated.

Finally, in response to the outbreak of COVID-19 in New Zealand, the Cook Islands government has closed its border to NZ and indefinitely halted plans for a “Realm” bubble.