Guam and French Polynesia have been the two Pacific territories most affected by the second wave of COVID-19, but their governments’ responses have been starkly different, whilst Vanuatu has given the green-light for seasonal workers, writes Hugh McClure.

The Pacific islands is once again a region in two parts with relation to COVID-19. In countries and territories affected by a second wave of the virus, case numbers have continued to compound, while the remainder of the region remains largely COVID-19 free.

Here is a snapshot of policy responses to COVID-19 in the Pacific region, correct as of 12 pm AEST, 1 September 2020. 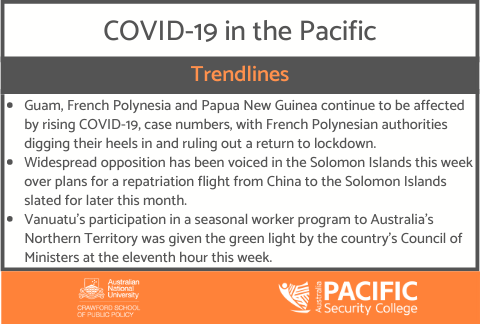 58 cases of COVID-19 were confirmed in PNG this week, a reduced number of new cases compared to recent weeks. In the past week, the majority of new cases were reported in Western Province, highlighting the extent of community transmission associated with the Ok Tedi mine. Figures indicate that close to 15,000 tests have now been conducted in the country. In neighbouring Papua Province (Indonesia) 3796 cases have been confirmed while 807 cases have been confirmed in West Papua Province.

The territories of Guam and French Polynesia have been most affected by a second wave of the COVID-19 pandemic, yet the response by government in the two territories has been markedly different.

In Guam, the territory’s lockdown has been extended for a further week, with all businesses to remain closed with the exception of grocery stores, healthcare and other essential services. Guam’s primary elections have also been canceled, with all candidates set to advance to the 3 November general election.

Despite cases numbers being up in French Polynesia, authorities have dug their heels in to rule-out any return to lockdown or the declaration of a state of emergency. This comes despite five unions declaring they will strike on Thursday unless COVID-19 measures are tightened in the territory. Unions have demanded the re-introduction of a 14-day quarantine for arriving travelers and the wider availability of masks, saying that the health and safety of workers cannot be assured. Figures reveal that more than 7,500 tourists arrived in Tahiti from mid-July to mid-August, with 90 per cent traveling from the US or France.

Vanuatu’s Council of Ministers has given the green-light to the resumption of the Seasonal Worker Program between Australia and Vanuatu. 170 ni-Vanuatu workers are set to travel to Australia’s Northern Territory during the first week of September to work on mango farms. All workers will be subject to a 14-day quarantine on arrival in Australia.

800 ni-Vanuatu seasonal workers awaiting repatriation in New Zealand are one step closer to returning home with Vanuatu’s Ministry of Health granting approval for Air Vanuatu’s inflight protocols. The Vanuatu government looks set to allow four repatriation flights per week during the second repatriation phase, expected to commence with a flight from Brisbane on 5 September.

Briefly, Fiji has further loosened restrictions this week, with venues allowed to now operate at 50 per cent capacity, regardless of their size. Also in Fiji, the country’s Minister for Women has said that there has been a sharp rise in calls for assistance to a domestic violence hotline during the COVID-19 pandemic. The hotline received 87 calls in February a figure which rose to 527 in April.