An increase in COVID-19 cases amongst PNG healthcare workers has caused alarm, while reports have emerged that Indonesia has used the pandemic to repress human rights in West Papua, Hugh McClure writes. 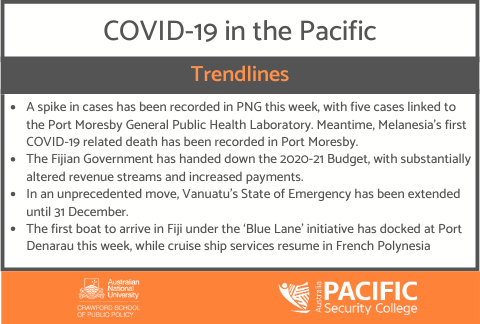 The number of confirmed COVID-19 cases has continued to rise in the Pacific islands region this week. The number of cases in Papua New Guinea has increased to 17, with five cases now associated with staff at the Port Moresby General Public Health Laboratory. State of Emergency (SoE) Controller David Manning said the increased number of cases linked to healthcare workers in the capital as ‘alarming’.

In sad news this week, it has been reported that a 48-year-old PNG woman who died on Sunday while being treated for advanced-stage breast cancer was found to be positive for COVID-19. While it seems unlikely that COVID-19 was the cause of death, medical experts have acknowledged that her illness may have been complicated by COVID-19, making her the first COVID-19 related death in Melanesia.

Fiji has recorded one further case of COVID-19 in border quarantine this week, bringing the country’s total to 27. New Caledonia has recorded its 22nd case, the Northern Mariana Islands has recorded its 37th confirmed case, while the number of cases in Guam continues to rise – albeit more slowly – to a total of 319. 2,640 cases have been recorded in Papua province and 368 have been confirmed in West Papua province. Reports continue to surface of Indonesian authorities using COVID-19 as a means to repress human rights in West Papua after it came to light that two West Papuans were shot dead by Indonesian military in the name of enforcing COVID-19 restrictions.

A $390 million stimulus package is the centrepiece of the Fijian 2020-21 Budget which was handed down this week. The budget deficit has pushed the debt to GDP ratio to 83.4 per cent, in part due to tax reductions of $232 million. The government has predicted the single-largest economic contraction in Fijian history of 21.7 per cent, with remittances forecast to fall by 15 per cent and foreign direct investment predicted to collapse by 40 per cent. With one-third of the workforce having either lost their job or faced reduced hours during the pandemic, the Minister for the Economy has outlined that 86,000 Fijians accessed relief payments from their pension fund in stage one, with 26,000 accessing support during phase two.

The Vanuatu government has extended the country’s SoE until 31 December, following amendments made to the Disaster Risk Management Act. Opposition leader Ralph Regenvanu has subsequently written to the country’s president questioning the constitutionality of the extension, which is unprecedented in its length.

The first boat under the Blue Lane initiative has arrived in Fiji. Two New Zealanders were on-board the vessel which berthed at Port Denarau marina. Other Pacific governments, including Vanuatu, are considering this concept as a way to begin tourism operations while allowing visitors to quarantine for 14 days at sea.

Meanwhile, the first cruise ship to operate in the region in several months has left port in French Polynesia this week. The ship was half-filled and catered for an exclusively domestic clientele. Still in French Polynesia, with flights from Los Angeles having commenced, the government estimates that as many as 7,000 tourists will arrive in the country this August as it abandons mandatory quarantine measures, sparking some local concern.

Meanwhile, as hopes fade for a regional travel bubble, the Niuean premier has flagged cautious interest in a travel bubble for New Zealand’s realm countries. Dalton Tagelagi said that his government will wait to assess how a mooted travel bubble between New Zealand and the Cook Islands progresses before taking steps towards including his country.

Forum Island Country foreign ministers met briefly this week. They issued a joint statement that echoed the Tuvaluan te fale-pili concept that houses in close-proximity have a moral responsibility to care for and protect their neighbours.