The growth in COVID-19 cases in PNG continues this week, with the country now recording 401 cases. The territories of Guam and French Polynesia are currently in the grips of a severe second wave. The number of cases in Guam has more than doubled in the past fortnight, with 812 cases now confirmed. In French Polynesia 349 cases have been recorded, up from 166 cases a week ago. Elsewhere in the region, Fiji has reported its second COVID-19 related death, while the number of cases of the virus in the Indonesian provinces of Papua and West Papua has reached 4,309.

Here is a snapshot of policy responses to COVID-19 in the Pacific region, correct as of 12pm AEST, 25 August 2020. 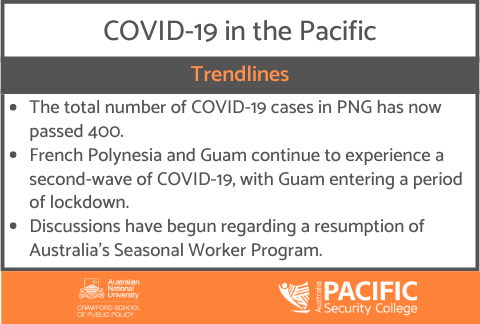 With 401 cases and four deaths now confirmed, the COVID-19 pandemic continues to escalate in PNG. Figures reveal that more than 1,500 defence force personnel have been deployed for COVID-19 operations, with 500 in the highlands, 200 along the borders, and 300 on standby. All those posted to the borders will enter a 14-day isolation before being released. In Port Moresby, officials have encouraged business owners to strictly enforce the “No Mask, No Entry” policy.

PNG’s Pandemic Controller David Manning has written to the Chinese government this week after it was revealed that 48 Chinese employees of the Ramu Nickel mine in Madang province have received an experimental COVID-19 vaccination.

PNG last week blocked a plane carrying workers from China, demanding answers over claims that the workers have been part of a trial COVID-19 vaccination program. Health Minister Wong has said that the case has “tested” PNG’s relationship with China.

The increase in cases has sparked alarm for nearby countries. The Solomon Islands’ Permanent Secretary to the Ministry for Health has admitted that more work needs to be done at the country’s Western Province border to support preparedness and response efforts to keep COVID-19 out of the country, while Nauru has taken steps to remove PNG from its list of COVID-19 safe countries.

Guam has entered a period of lockdown this week, with only essential businesses allowed to open. The lockdown comes in response to a substantial increase in cases a week ago, and the country’s seventh recorded death. 70 of 105 cases recorded on Friday 21 August are believed to be linked to the US military’s naval hospital on Guam, with the presence of US military ships and officers on Guam heating up rhetoric from independence activists. Nearby in the Northern Mariana Islands, the government has reintroduced a 10pm to 4am curfew, restricted indoor gatherings to no more than 10 people, and closed schools for in-person lessons.

287 cases have now been confirmed in French Polynesia’s second wave of the COVID-19 pandemic. US officials are now discouraging Americans from travelling to Tahiti.

The trial Seasonal Worker Program between Vanuatu and Australia’s Northern Territory looks set to commence next week. Pacific leaders have welcomed a decision by Australia’s National Cabinet to resume the Seasonal Worker Program and Pacific Labour Scheme, which has been on hold since March. The National Cabinet voted to recommence the programs for workers from across the Pacific and Timor-Leste. More details are set to be announced in the coming weeks with relation to quarantine and isolation processes, which will be organised between Australian states and territories and Pacific island countries.

Details are expected to be released this week regarding the second COVID-19 related death in Fiji, which was reported on Tuesday 25 August. Also in Fiji, a UN report has warned of a sharp increase in poverty. It has been cautioned that under a worst-case scenario, the number of children in poverty could rise from 98,226 to between 104,310 and 141,147. Finally, there are serious questions this week about Air Fiji’s economic situation. Air Fiji announced a $40.7 million profit for last year, without providing accurate figures on current losses – thought to be more than $30 million per month, given the airline is paying $24.9 million per month in fixed costs with a grounded fleet.

Briefly, the Solomon Islands government has cautioned that there is a “real risk” that long-term strategic action on climate change will take a back seat to COVID-19 concerns. Meantime, a scientist has stated that the COVID-19 pandemic provides an opportunity for Pacific countries to return to traditional food sources. Dr Vincent Lebot, a Vanuatu-based agriculture expert, said the pandemic has shown the limits of international trade, highlighting that local crops such as cassava, sweet potato and yams can be cultivated with a low carbon footprint, allowing for both climate adaptation and food security.