Rising case numbers in Indonesia’s Papua and West Papua provinces are causing concern, and the international response in the Pacific region has ramped up, Hugh McClure writes.

For many parts of the Pacific Islands region, including Fiji, Papua New Guinea (PNG), and New Caledonia, it has now been more than a month since a new case of COVID-19 has been confirmed.

The Week in Review 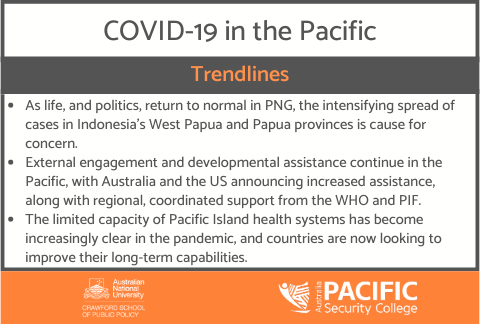 The past week has seen an increase in positive cases of COVID-19 reported in Guam, which recorded a spike of 11 new cases on 20 May, bringing their total to 166 positive COVID-19 cases. Meanwhile, the Commonwealth of the Northern Mariana Islands has recorded a 22nd case.

The reported number of cases in Indonesia’s West Papua province reached 130 this week, while some sources indicate that the country’s neighbouring Papua province could have as many as 686 cases.

29 COVID-19 cases were discovered in French Polynesian waters on an Ecuadorian fishing vessel this week.

While the ship had been anchored in an uninhabited bay for a month, there are concerns about the existence of the virus on other fishing boats operating in the Pacific. With local doctors used to test all the sailors on the boat, there are worries that such vessel movements may be a source for a new wave of COVID-19 in the Pacific.

For policymakers across the Pacific region, but particularly in PNG, the situation in Indonesia’s Papua and West Papua provinces is cause for grave concern. With cases continuing to rise exponentially each week, local authorities in PNG’s border provinces of Western Province and West Sepik hold concerns regarding the potential for the disease to spread into their communities, as illegal border crossings continue.

Meanwhile, restrictions are being gradually lifted across PNG with passenger flights to Bougainville having resumed this week.

As a major political stoush erupts in Port Moresby this week after former Prime Minister O’Neill was arrested and charged by police for alleged official corruption, the Opposition has increasingly voiced concerns regarding Prime Minister Marape’s handling of the COVID-19 pandemic, indicating that they will not support any extension to the State of Emergency beyond 2 June.

A broader Pacific regional response was at the forefront this week, with the World Health Organization and the Pacific Islands Forum collaborating to deliver medical supplies to a range of countries, with assistance reaching Fiji, Samoa, Vanuatu, and Tonga.

Australia has scaled up its developmental assistance, announcing $100 million this week to support the Pacific COVID-19 response. While PNG will receive more than one-fifth of this funding, the Solomon Islands, Vanuatu, Fiji, Samoa, Tonga, Timor-Leste, Kiribati, Nauru, and Tuvalu will each receive support of between $3 million and $13 million.

Australia has also expressed support for Fiji joining a Trans-Tasman Travel Bubble and has further detailed visa extensions for Pacific Seasonal Worker Programme participants to remain in Australia on extended visas for up to 12 months.

American Samoa this week received $24 million in stimulus from the US government to bolster economic growth. Meanwhile, the US Education Secretary has announced substantial investments to assist schools’ responses to physical distancing in the Federated States of Micronesia, the Republic of the Marshall Islands, the Commonwealth of the Northern Mariana Islands, Guam, Palau, and American Samoa.

As donations have flowed into the Pacific region, the limited health capacity in the Pacific has become increasingly clear as countries look to make changes to improve their long-term health capabilities. In the Solomon Islands, the Permanent Secretary for Health and Medical Services has said that her ministry has been able to identify gaps that need to be strengthened in that country’s health system as a result of the 36-hour trial lockdown which occurred last week.

Meanwhile, Prime Minister Marape has outlined that regional health capacity will be the focus of his government’s investment in PNG’s health system, with a continued focus on decentralisation of services in the country. As part of the investment, the prime minister has unveiled plans to build hospitals in the 22 provinces, and one major, upgraded referral hospital in Port Moresby.