The new year has brought limited reprieve in the Pacific Islands region, as COVID-19 cases have continued to increase throughout January and economic pressures have grown, Hugh McClure writes.

In Solomon Islands there have been 17 cases recorded, five cases in Wallis and Futuna, four in Republic of the Marshall Islands, two in Samoa, and one case in each of Vanuatu and the Federated States of Micronesia.

Here is a snapshot of policy responses to COVID-19 in the Pacific region, correct as of 12pm AEDT, 27 December 2020. 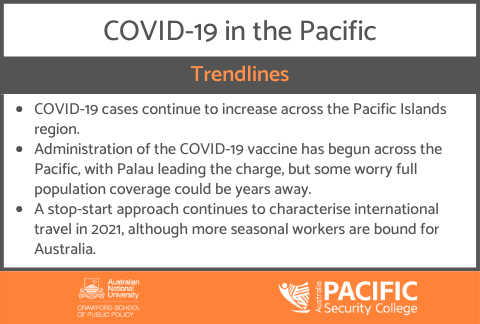 Vaccine rollout in the Pacific island region has begun in haste in January, with progress strongest in Micronesia as a result of the United States Government’s Operation Warp Speed vaccination program.

Some have tipped that Palau could be the world’s first country to be mostly-vaccinated, while the Centre for Disease Control and Prevention reports that CNMI is one of the leading jurisdictions in terms of percentage of population already vaccinated. Vaccination has begun for frontline healthcare, airport and seaport workers in Marshall Islands, while the Federated States of Micronesia and American Samoa have also begun vaccination.

Meanwhile, more than 1,000 French Polynesians received their first inoculation during the first week of the territory’s vaccination drive. Samoa’s Prime Minister has announced that he expects delivery of vaccines as early as February.

Progress on vaccination has been slowest in Melanesia. This week, Australia has committed to providing $111 million to PNG – in addition to ongoing aid commitments – for COVID-19 vaccinations over the coming three years. There is a risk that a slow roll-out could allow community spread to accelerate.

In neighbouring Solomon Islands, Australia has announced $4 million for vaccine funding. In Honiara, Prime Minister Sogavare has expressed his hope that his entire population will be vaccinated by the end of 2021, however some experts don’t share his optimism. Some international public health researchers have cited concerns that wealthier nations will hoard vaccines resulting in developing countries, including Solomon Islands, being forced to wait years to receive a vaccine. Dr Paula Vivili of the Pacific Community (SPC) is optimistic and has said the wait could be just a few months for COVAC to reach developing countries..

A National Court in PNG has ruled the appointment of David Manning as Police Commissioner in December 2019 was unlawful. As a consequence, Manning – who also serves as the high-profile COVID-19 pandemic controller, responsible for much of the government’s COVID-19 public communications – must vacate office on 29 January 2021. It is unclear who will step up and take on the controller job.

Seasonal worker programs are gathering attention in Australia this month after the Victorian government announced that 1,500 workers bound for Victoria would quarantine in Tasmania. Three flights carrying seasonal workers left Vanuatu, bound for Australia in the first week of January. A fourth flight to Australia, and four additional flights to New Zealand, are also planned.

Despite the uptick in numbers, the Australian agriculture sector is still expecting a huge shortfall in labour and would like to see more workers. 50 Samoan seasonal workers flew to New Zealand at the start of January.

Elsewhere, travel between Australia and PNG has hit a hurdle, with Air Niugini reducing its flight capacity to Australia by 60 per cent. PNG authorities are investigating how a flight carrying 176 passengers from Malaysia was allowed to land without authorisation from the PNG Pandemic Controller, as Malaysia is on a list from which travel is restricted.

Domestic travel has also faced road-bumps through January. Land and sea travel between East and West New Britain has been banned due to a surge in cases in West New Britain. In response, David Manning went on the offensive earlier this month, stating that penalties will apply for those who do not wear a mask.

Repatriation continues to suffer from a stop-start approach. It is now estimated that 2,000 Samoans await repatriation from New Zealand, with the Samoan government placing increased barriers on entry to the country as a result of the discovery of a new strain of the virus in January. The United Kingdom has provided Vanuatu with $71,564 to assist in repatriation.

New figures released in January have shed light on the state of the Solomon Islands economy as a result of the COVID-19 pandemic. The Central Bank reported that declining production in logs, fish, and palm oil saw inflation dip to two per cent by September, down from 10.5 per cent at the start of the pandemic.

Solomon Islands posted a deficit of $31.9 million in November 2020, with revenue up two per cent and expenditure up 32 per cent. Meanwhile, the Ministry of Health and Medical Services have claimed that they are yet to receive yet to receive $150,000 in aid earmarked for COVID-19 relief from China.

Briefly around the region: Fiji has extended its rent freeze until the end of the year; the World Bank has released a study which found that tourism-related employment fell by 64 per cent throughout 2020 in Vanuatu; a new partnership has been signed between the European Union, SPC, the World Food Programme and the World Health Organization to support Pacific island countries’ health systems adapt to COVID-19; the Polynesian Leaders Group will meet virtually on 29 January after their 2020 meeting was postponed — COVID will be on the agenda; CNMI taxpayers look set to receive a stimulus of $600 per person as part of the United States’ pandemic relief package; and New Zealand has announced $6.44 million to assist small and medium enterprises in the Pacific bounce-back from the effects of the COVID-19 pandemic. 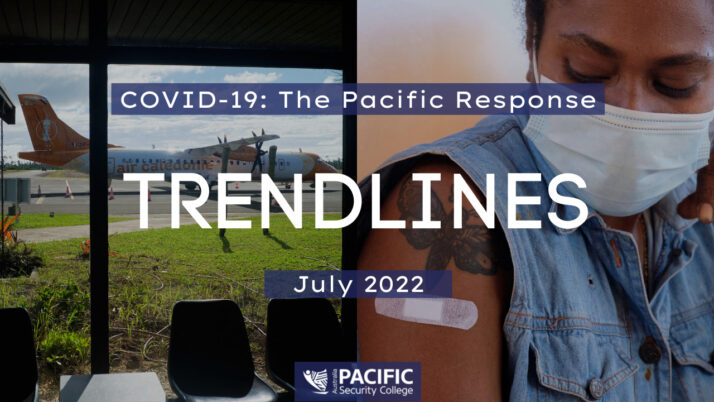 The Health Authority of Papua New Guinea’s most populous province has had to shutter its doors, whilst nearly one-third of Nauru’s population has been detected with COVID-19.