Tropical Cyclone Harold and COVID-19 are predicted to cost Vanuatu 61 per cent of it’s 2021 GDP, whilst Pacific leaders have emphasised the continued effects of the pandemic at the United Nations, Hugh McClure writes.

COVID-19 cases continue to rise in the Pacific islands region this week, with French Polynesia once again leading the count, reporting 5,859 cases. This reflects an increase of more than 2,000 cases in the past week. Elsewhere, Papua New Guinea (PNG) has now conducted more than 27,000 tests, with 588 confirmed cases across 13 provinces and the National Capital District. Fiji and Solomon Islands have recorded one new case apiece in border quarantine, Guam has now recorded 4,196 cases and 71 deaths since the start of the pandemic, while the Northern Mariana Islands has recorded 86 cases. In the Indonesian controlled provinces of Papua and West Papua, 8,785 and 3,891 cases have been detected respectively.

Here is a snapshot of policy responses to COVID-19 in the Pacific region, correct as of 12pm AEST, 27 October 2020. 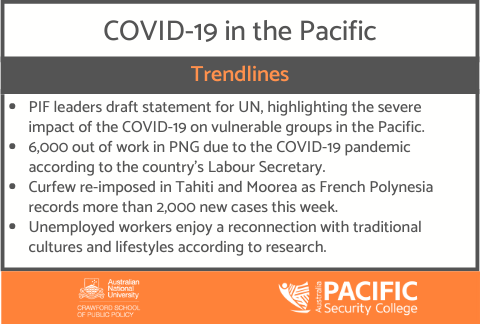 Pacific Island Forum leaders have drafted a statement, entitled ‘Protecting the Health and Wellbeing of the Blue Pacific’, to be considered at the United Nations General Assembly special session on COVID-19 in December. The statement articulates the need to address the disproportionate impact of COVID-19 on vulnerable groups in the Pacific, including those with disability, the elderly, women and girls. UN Coordinator for the Pacific Sanaka Samarashinha has marked the 75th Anniversary of the UN with an event in Suva, at which he stated that multilateralism and global action would be the key to rebuilding from COVID-19.

Meeting last week, Pacific Island Forum foreign ministers advocated the importance of cooperative multilateral projects to ensure equitable access to safe and reliable COVID-19 tests, treatments and a potential future vaccine. While Secretary-General Dame Meg Taylor welcomed Australia’s commitment to ensure access to a vaccine for the Pacific, Foreign Ministers cautioned the perception that the Pacific had fared well through the pandemic, highlighting the substantial economic impact of border closures.

6,000 people have lost their job as a result of the COVID-19 pandemic and response, according to Papua New Guinea’s labour secretary. Also making news in PNG this week, two new cases have been confirmed on-board a cargo ship which regularly travels between Australia, PNG and the Solomon Islands.

Vanuatu Prime Minister Bob Loughman has released the Tropical Cyclone Harold and COVID-19 Post-Disaster Needs Assessment in Port Vila this week. The reports estimate the monetary value of the disasters to be 61 per cent of the country’s predicted 2021 GDP, with recovery and reconstruction from Tropical Cyclone Harold expected to be approximately 36 per cent of GDP. The prime minister has earmarked 21 per cent of the 2021 budget to be spent in the productive sector, with a focus on boosting livelihoods and recovery through investing in fruit, vegetable and commodity production.

Also making news in Vanuatu this week, Port Vila has been named as the host of Australia’s Pacific Fusion Centre. The Pacific Fusion Centre will build regional capacity to respond to common security priorities as identified in the Boe Declaration on Regional Security. According to Australian Foreign Minister, Senator Marise Payne, in recent times the Centre has pivoted to support the COVID-19 response, acting as a reliable source of information for Pacific governments on pandemic developments including countering disinformation, border security issues, and ensuring food security.

Amidst rising case numbers, a nine-hour curfew has been imposed in Tahiti and Moorea this week. The curfew will run from 9pm until 6am and comes on the back of public cultural and sporting events being cancelled. The health minister has ordered the closure of a high school in Tahiti due to a cluster of cases.

Dr Api Monovo from Massey University has released research that reveals unemployed workers in Pacific island countries have enjoyed a reconnection with traditional cultures and lifestyles during the COVID-19 pandemic shutdown. With tens of thousands out of work across the region, many have returned to villages and rural communities where they have engaged with subsistence agriculture, gardening and fishing practices to sustain their families. Dr Monovo says that the traditional safety net highlights the resilience and innovation inherent to Pacific cultures and people.

Health management is again in the spotlight in Solomon Islands as the country continues to record cases in border quarantine. The Ministry of Health and Medical Services has said that there is a need for advanced nursing practices and extended nursing roles in the country. Meantime, the governor of Makira Ulawa province has called upon his communities to avoid travel to Honiara. The governor has unveiled a localised COVID-19 adaption policy, which reduces the number of entry points to the province.

Australia’s Senator Marise Payne and Minister for International Development and the Pacific, Alex Hawke MP, have detailed plans for the Nadi Flood Alleviation Project. A partnership with the Fiji Government, the Project seeks to reduce the effects of flooding in Nadi, recognising its regional importance as a transport hub. The ministers stated that such infrastructure works are critical to the region’s COVID-19 economic recovery.

Briefly, Marshall Islands says it is seeking opportunities to engage with other COVID-free countries to open economic corridors, while the Hawaiian governor has granted American Samoans on medical charter flights quarantine exemptions to enter his state.