Papua New Guinea (PNG) has now recorded 592 cases of COVID-19 since the start of the pandemic, 13 cases have been recorded in Solomon Islands, 34 cases in Fiji, 28 cases in New Caledonia, 7,262 cases in French Polynesia, 4,641 cases and 79 deaths have been confirmed in Guam, 96 cases in the Northern Mariana Islands, and 13,226 in the Indonesian provinces of Papua and West Papua.

Here is a snapshot of policy responses to COVID-19 in the Pacific region, correct as of 12pm AEST, 3 November 2020. 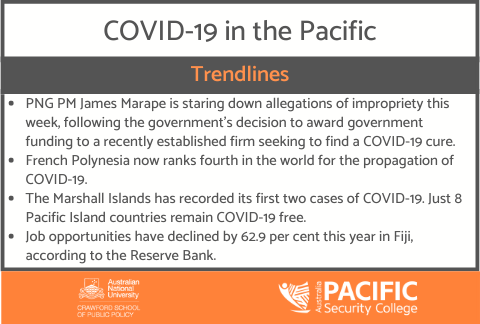 PNG Prime Minister (PM) James Marape is staring down allegations of impropriety this week, following the government’s decision to award $2.8 million to Niugini BioMed Limited, a company that was established just one month ago with the purpose of creating a drug to cure PNG citizens of COVID-19. Mr Marape has said that owing to PNG’s great biodiversity his citizens have long-developed ways to live with disease, and that he is “not a Prime Minister to kill ingenuity, research, science and study”.

There has been a jump in cases of COVID-19 confirmed in Solomon Islands, with the total climbing to 13. All cases to date have been contained within isolation facilities and PM Sogavare has announced that the threat of community transmission in the country remains low.

500 nurses in Solomon Islands are threatening to strike over the government’s failure to pay allowances promised to nurses for working on the “frontline” of the COVID-19 response. The threatened industrial action comes as the Solomon Islands government takes steps to fast-track nurse recruitment.

French Polynesia is now recording around 450 new cases each day. Despite this, President Fritch has defended the decision to reopen borders in July, telling the Assembly that the country was ‘COVID-19 prepared’ from late May.

Marshall Islands has reported its first two confirmed cases of COVID-19 this week. Both cases can be attributed to US military personnel who flew from Honolulu to Kwajalein. The two cases remain in quarantine and the National Disaster Committee says that there is no threat of community transmission. The cases come following the first repatriation of individuals from the US over the weekend.

Gunshots have been reported in Jayapura this week as students demonstrating against the Indonesian Government’s planned Special Autonomy laws were pursued by authorities. At least one student has been taken to hospital, with a police spokesperson saying that public gatherings are banned as a result of the COVID-19 pandemic.

Making news in Fiji this week, the Reserve Bank reports that job opportunities in the country have declined by 62.9 per cent since January. Reports indicate that with the COVID-19 pandemic disproportionately hurting female employment there has been an increase in individuals engaging in sex work. The Fiji Cancer Society says that the pandemic has affected the supply of medicine for cancer patients in the country.

In the aftermath of New Zealand’s general election a fortnight ago, steps are being taken to restart the Samoan seasonal worker program. Meanwhile, discussions are underway for a proposed travel bubble between Niue and New Zealand. In Cook Islands, which is also seeking a travel arrangement with New Zealand, the Opposition has ridiculed the government’s decision to remove supervised quarantine requirements for arriving passengers.

A significant expansion in healthcare in Northern Mariana Islands has come online this week with the opening of the Alternate Care Site at the Kanoa Resort in Saipan. The facility has up to 70 intensive care beds and 115 mid-level care rooms.

Finally, States of Emergency in Tonga and Samoa have been extended till late November.