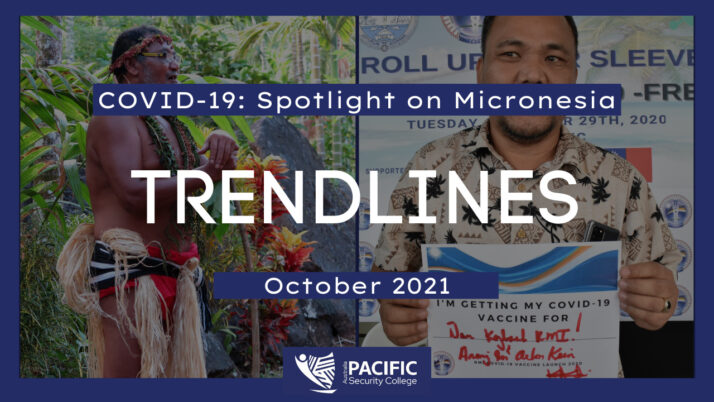 The COVID-19 pandemic has not had a consistent impact across the countries and territories of Micronesia. While parts of the sub-region, including Kiribati, Nauru and the Federated States of Micronesia (FSM) have remained virus-free throughout the pandemic, the US territories of Guam and the Commonwealth of the Northern Mariana Islands (CNMI) have been subject to frequent case clusters and larger-scale outbreaks.

Guam quickly emerged as the Pacific Island region’s COVID-19 epicentre in the first months of the pandemic, and has ranked as one of the worst affected parts of the region ever since.

In the 18 months from March 2020 to September 2021, there were 10,855 cases and 153 deaths recorded in Guam, a significant number by global standards for a territory of 170,000 people. 248 cases and 2 deaths have been recorded in CNMI, which has suffered a constant, if not many, cases throughout the pandemic. Four cases were recorded in the Republic of the Marshall Islands in November 2020, while two cases were recorded in Palau in August 2021, attributed to travellers arriving from Guam.

The five independent Micronesian countries – Kiribati, Nauru, Palau, FSM and RMI – each closed their international borders early in the pandemic, and have subsequently remained virus-free, or recorded just a small handful of cases over the past 18 months. Conversely, the two US territories, which have been unable to unilaterally close their borders, have faced frequent outbreaks.

Clearly, the key ingredient to the success achieved by the Micronesian countries which have remained virus-free for the bulk of the pandemic has been the ability for some countries to make the most of the vast moat that is the Pacific Ocean to insulate themselves from the virus.

Leaders recognised early in the pandemic that prevention was better than cure. Nauruan President Lional Rouwen Aingimea spoke plainly about the risk posed by the pandemic:

“Nauru is particularly vulnerable to the threat of coronavirus … the global impact indicates that should this virus enter Nauru, the results could be devastating.”

With limited health infrastructure, Micronesian governments recognised they lacked the capacity to respond to an outbreak of COVID-19. In a preventative move, international borders were closed, so the worst-case scenario of community transmission could be avoided. In its State of Emergency declaration on 26 March 2020, which saw schools and borders closed, the Kiribati Government stated:

“The State of Public Emergency will allow Kiribati to prepare and manage the impact of this … pandemic… The Government acknowledges that the people of Kiribati are very vulnerable to this virus as it [the government] lacks the human resources and capacity to prevent and stop the spread of disease once it enters Kiribati.”

Despite the State of Emergency being billed as a mechanism to provide the government time to boost its health infrastructure, few inroads have been made 18 months on. Despite pleas for repatriation from stranded seamen, international students and transnational communities, the government has frequently called for patience.

While the first repatriation flight arrived in Kiribati on 19 November 2020, not one of the 286 i-Kiribati seasonal workers who travelled to New Zealand before the outbreak of the pandemic have been repatriated. Where repatriation services have been promised, they have been cancelled on occasion, out of fears the health system could be overwhelmed.

The impacts of border closures have not merely been limited to Kiribati, locals in FSM have also been locked out, while strict lockdown measures in RMI have led to a spike in domestic violence rates.

Despite the governors of both Guam and CNMI imposing stay-at-home orders, curfews and closing non-essential businesses and services, these US territories have been unable to unilaterally close their borders to either tourists or US air force and navy rotations.

Guam’s residents, who suffer high rates of NCDs and other comorbidities, share their island with thousands of US military officials. The decision to quarantine officials, including thousands of sailors who had been exposed to COVID-19 on-board the USS Theodore Roosevelt at eight hotels on Guam has been cited as leading to an increase in cases in the territory. There has been anger that US military personnel have allegedly flouted guidelines by entering the community-at-large, spurring independence activists. While Guam’s health facilities are somewhat more developed than other parts of the Pacific, owing to its relationship with the US, it reported just 15 ICU beds and 50 ventilators in 2020.

Marshallese Pacific Islanders in the United States have been disproportionately impacted by the COVID-19 pandemic. While Marshallese make up just 1.5% to 3% of the population of Benton and Washington counties, Arkansas, they made up 19% of COVID-19 cases and 38% of COVID-19 deaths between March and June 2020. Pacific Islanders in Hawai’i were twice as likely to die or be hospitalised by COVID-19 than other racial and ethnic groups, with Chuukese, Marshallese and Samoans identified as most impacted.

Micronesia has led the Pacific, and the world, in the pace of its vaccine administration.

Supported by vaccine access through Compact of Free Association agreements with the US, RMI was the first independent Pacific Island country to begin its vaccination drive in December 2020. A month later, Palau made global headlines due to the speed of its vaccination campaign. Outpacing the US, some thought it might become the first place in the world to achieve full vaccination.

Vaccine diplomacy has been a key issue throughout 2021, with Micronesian countries leveraging relationships with both traditional and non-traditional partners to access vaccines.

Compact of Free Association agreements have been critical to ensuring supply for RMI, Palau and FSM. The US territories of Guam and CNMI have also received doses from the US. Boasting high vaccine coverage, Guam offered vaccines to tourists in a novel approach to resume tourist travel to the territory.

Bilateral donations have often been more efficient than the multilateral COVAX initiative. RMI pulled out of the COVAX program due to the steady stream of vaccinations it received from the US. The Kiribati Government announced in September 2021 that it had received a sufficient supply of vaccines to inoculate its entire target population, following shipment of 90,000 Sinopharm vaccines from China, in addition to 52,000 doses from Japan, 48,000 through the COVAX facility and 14,000 from Australia. While supply has been strong, progress in administering vaccines in Kiribati, a sparsely populated country covering an Exclusive Economic Zone the size of India, has been slow. Partners should consider end-to-end vaccine assistance. A large gap in vaccination rates for rural and urban parts of RMI highlights more work is needed to support vaccination outside towns and cities in order to ensure all are protected when borders reopen.

High vaccination rates are translating into increased freedoms in some parts of Micronesia. CNMI officials have progressively removed restrictions under a plan to shift to normalcy as vaccine rates lift. While reduced restrictions were initially accompanied by low levels of community transmission in CNMI, an increase in cases has been detected in Guam, despite high vaccination rates, as governments shift to endemic COVID.

Sustainable pathways to the future

The COVID-19 pandemic has provided a shock to the economic and social fabric of the region. A collapse in tourist travel has impacted parts of the sub-region, including Palau, CNMI and Guam, while a decline in resources trading has particularly impacted RMI, whose port in Majuro was formerly the world’s busiest tuna transhipment port.

Pacific Island governments are increasingly looking to the future, with travel bubbles established – albeit in fits and starts – between Micronesian countries including Palau, CNMI and Guam with major tourist sources including Taiwan, South Korea and the US. In RMI, fishermen have been offered fast-tracked vaccinations in order to reboot this critical sector.

Attention will increasingly shift to making these pathways widespread in order to facilitate a meaningful reopening. 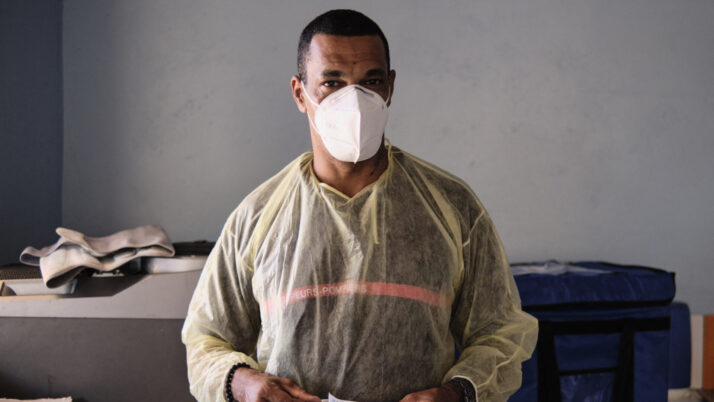