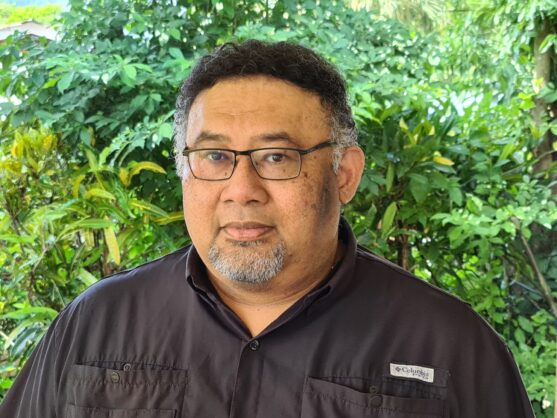 Ioane Alama has worked in the Pacific Islands as a regional public servant for several years, last serving as the Head of Secretariat for the Pacific Immigration Development Community (PIDC) based out of Samoa.  With a background in enforcement both at the national and regional level, Ioane worked as a Revenue and Customs Officer in Samoa until 2010 while also serving shortly with the Office of the Attorney General and also as a founding Member of the Samoa Transnational Crimes Unit as an analyst.

Ioane joined the Pacific Islands Forum Secretariat (PIFS) in Fiji as Regional Security Adviser in 2010 and headed the Law Enforcement Unit until 2015 where he was responsible for coordinating the annual meetings of the Pacific Islands Counter Terrorism Working Group and Session One of the annual Forum Regional Security Meeting that had been established under the Honiara Declaration.  During this time, Ioane was responsible for compiling and developing an annual Pacific Transnational Crimes Assessment for Forum Members and coordinated the drafting of several regional resources, including a national guide to combat TNOC, best practices in Pacific Islands law enforcement information sharing, model regional principles for Pacific national security sector governance and also co-authoring a publication on unexploded ordnance in the Pacific to raise attention to this important issue.

In 2015 Ioane was recruited by the Oceania Customs Organization as Operations Manager, where he served for one year managing the implementation of a number of national technical assistance projects and also chairing a technical working group to strengthen information sharing.

Ioane joined the Pacific Immigration Development Community as Head of Secretariat in 2016 where he served until 2022 implementing a number of activities to expand the operations of this important regional enforcement organisation greatly.  Ioane managed the introduction of national technical assistance programmes to strengthen domestic PICT immigration operations, supported PIDC Members to endorse regional information sharing and coordination arrangements, and oversaw the development of several model best practice documents for PICTs as well as the creation in 2020 of the first online Post Graduate Diploma in Border Management academic programme designed for the Pacific Islands in partnership with the University of the South Pacific.