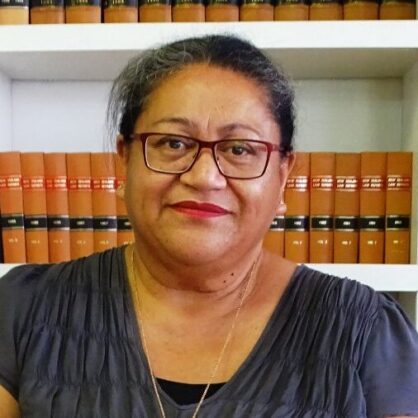 Taulapapa Brenda Heather-Latu is a partner of Latu Lawyers, a law firm based in Apia, Samoa.

Brenda worked first as a Crown Counsel Assistant (1988-1990) in the Treaty and Commercial Teams, and then was appointed as Crown Counsel working in the Commercial Regulatory Team in the Crown Law Office in Wellington, New Zealand. She first moved to Samoa in 1996 to take up the post of Principal State Solicitor with the Office of the Attorney General, Samoa and was appointed to the post in May 1997 and served three terms until December 2006.

Brenda joined private practice in January 2007 and undertakes a broad range of legal work and Court advocacy as well as legal consultancies locally and regionally in the areas of: corporate governance and directors duties; law, justice and judicial training; trade; regional bodies; economic use of customary land; IT for business development, as well as legal drafting including : Meteorology Bill; draft bills in Quarantine, Animal Health and Plant Protection; Divorce and Maintenance Amendment bills and Lands and Titles Amendment Bill.

Brenda was an active participant in PILON from 1997 – 2006, and in 2005 wrote a paper called ‘Mending the Nets’ about the critical need for a regional approach to Law and Order led by PILOM and the Pacific Chiefs of Police Organization with the guidance and support of the Pacific Forum Secretariat.

Taulapapa is also the Honorary British Consul to Samoa and is a Judicial Officer for World Rugby.