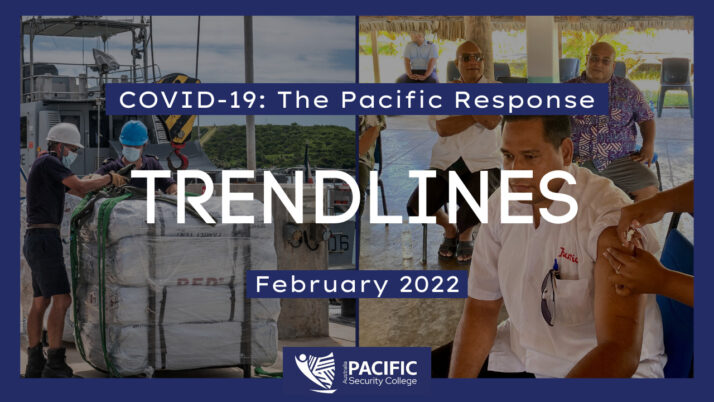 The rapid spread of the Omicron variant within the Pacific has seen community transmission in the previously COVID-19-free countries of Palau, Kiribati, Tonga, and Solomon Islands.

The Omicron variant has led to a significant increase in the number of cases throughout the Pacific region to start 2022, with the majority of countries now seeing community transmission of COVID-19 or having cases in quarantine.

As of 2 February, Fiji had 1,397 active COVID-19 cases with a 30.4 per cent test positivity rate. According to World Health Organization reporting, the country had recorded 62,855 COVID-19 cases and 801 deaths since he pandemic began. Guam saw a surge in Omicron cases, with the territory’s total cases at 25,617 and the death toll at 294.

Here is a snapshot of policy responses to COVID-19 in the Pacific region, correct as of 2 February 2022.

Solomon Islands entered its first lockdown, with the country recording 1,852 cases. The virus came to the country via the illegal entry of a vessel from PNG to the remote island of Ontong Java. Although the outer island was locked down, COVID-19 quickly spread to Guadalcanal, prompting the government to lockdown Honiara for an initial period of 60 hours from 19 January, before it was extended to 30 January.

After this period, a partial lockdown took effect with some restrictions remaining, including a 3pm curfew enforced in Honiara. The country’s government moved quickly from a containment strategy to one of mitigation, with health officials expecting the number of cases to spiral into the thousands.

In light of the concerning health situation, the Australian Government sent two flights to the country, carrying emergency medical supplies. The Solomon Islands vaccination rollout remains sluggish, with only 11 per cent of its total population fully vaccinated.

Kiribati’s status as one of the last COVID-19-free countries has ended, with the nation going into lockdown on 22 January. 36 passengers aboard a repatriation flight tested positive for the Omicron variant in quarantine. The virus likely entered the community through a COVID-19-positive security guard, resulting in community transmission in the capital South Tarawa.

A lockdown was subsequently enforced, alongside mandatory mask-wearing. Currently, there have been 767 cases recorded during the outbreak, however the nation’s health ministry warned that these cases are just the ‘tip of the iceberg’, and UNICEF expressed concern about the outbreak.

Palau, despite its world-leading vaccination rate, also saw a rapid escalation of COVID-19 infections through January, with approximately 1,200 active cases in the country at time of writing. The outbreak was initially caused by travellers arriving in the country not having to quarantine, with the virus quickly spreading into the community. Although no lockdown was enforced, a mask mandate was implemented and in-person school teaching was been suspended until mid-February. Cases of the virus are expected to start to drop in the next two weeks.

Samoa implemented a nationwide lockdown on 22 January, after a repatriation flight from Australia saw 31 positive COVID-19 cases reported. These cases remain in quarantine, as Samoa’s director-general of health stated that the country is well-prepared to manage the virus. The lockdown was lifted last week, however, restrictions remain with gatherings limited to 30 people, and future repatriation flights suspended.

Tonga reported five cases of COVID-19, as the country entered a snap lockdown at 6pm on Wednesday 2 February. Two cases were initially detected through routine testing of frontline workers at Nuku’alofa wharf, however, a woman and her two children have subsequently tested positive, sparking fears of community transmission in the Kingdom. Tonga’s vaccination rates are healthy, with more than 83 per cent of its population fully vaccinated, with 96 per cent having received a first dose. The lockdown will be reassessed on Friday 4 February by authorities.

PNG reported its first case of the Omicron variant in mid-January. A man travelling from South Africa was confirmed positive, despite having tested negative on arrival. This has sparked fears of a fourth wave within the country, with Port Moresby General Hospital recording a 60 per cent test positivity rate in the last week.

In vaccination news, Fiji began its booster shot rollout, with more than 68,000 shots having been administered. Hospitalisations remain low despite the surge in cases, with the country’s health ministry shifting its priorities to begin addressing non-communicable diseases. Schools reopened for years 8-13 on 24 January for the first time since April 2021.

Meanwhile, in French Polynesia, the country has fully implemented its mandatory vaccination law for those working with the public. The law faced several legal challenges in France throughout 2021, however, from 22 January it will be enforced with financial penalties. Additionally, a vaccine pass will replace the existing health pass from 8 February, barring unvaccinated people from restaurants, sports arenas, and other venues.

The rapid spread of the Omicron variant in New Caledonia has increased speculation that the territory’s congress will introduce compulsory vaccination for all citizens. The country recorded 1,515 new infections in the 24 hours to 2 February, and has more than 6,000 active cases. A mandatory vaccination law passed in December has had its application repeatedly deferred, but is now expected to be enforced by the end of February. If fully enforced, New Caledonia would be the fifth country in the world after Tajikistan, Turkmenistan, Austria, and the Vatican to impose compulsory vaccination.

Briefly, American Samoa recorded positive cases on two different flights from Honolulu, and one quarantine hotel worker, but has managed to keep the virus from spreading in the community. Vanuatu began the rollout of the Johnson & Johnson vaccine on 28 January. Finally, the Northern Mariana Islands recorded its 23rd COVID-19-related death. 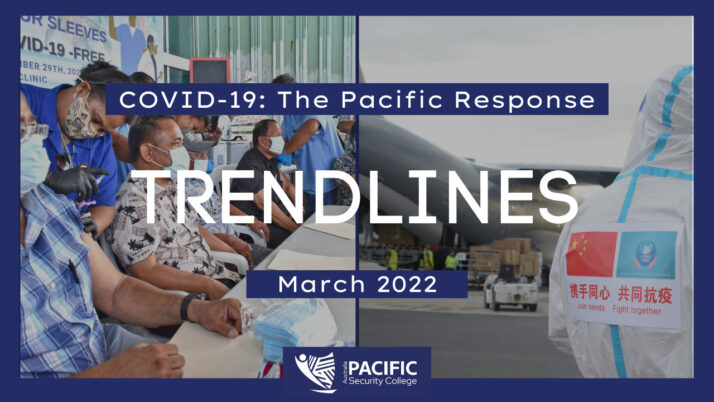